Home Runs Up and Down the Zone

The topic of Charlie Furbush and his elevated (but small sample) home run rate came up for discussion between Jeff Sullivan and I over the weekend and it got me thinking. That’s not true. It would be impossible for it to have gotten me thinking; otherwise I need to talk to the Red Cross about some new and unusual first aid techniques. It did direct my thinking however and the first hypothesis that came to my mind was that to wonder if maybe Furbush’s pitch locations played a part in his home run proclivity. Specifically, I wondered if Furbush was elevating his pitches. That seemed a plausible engine for more home runs.

However, such an explanation relies on an assumption that elevated pitch location does in fact open up a pitcher to a higher home run rate. Usually that’s in part attributed to simply more fly balls coming from pitches above the knees and not actually an increase in home run rate as we typically (per fly ball or ball in air) measure it. I decided to look at both. Using pitch F/X, I grabbed all the batted balls and separated them into horizontal bands. It turned out that the two plots (one using home run per ball in air and the one below) aren’t radically different. 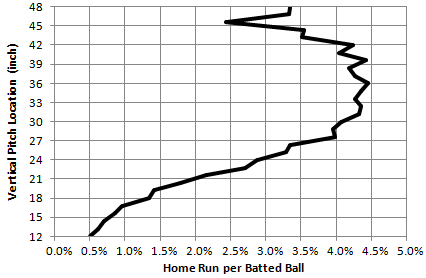 The curved shape of the plot is what I expected, but I was surprised to find it more of a gentle, rounded (turn your head. No. Other way) peak rather than a more triangle shape. Between roughly 27 and 42 inches there is little variation in the home run rate, wobbling in the 4-4.5% range. Over 600 balls in play (a good number), that’s about a two home run spread. Those 15 inches cover almost a foot and a half worth of vertical space and most of the vertical strike zone, which past studies have shown is usually called between 21 and 42 inches.

So most of the strike zone ends up with being about equally susceptible to home runs. It’s often remarked how pitching “up in the zone” is the danger zone for home runs. It makes intuitive sense and it’s not wrong; but from the data, the general wisdom appears overblown to me. There’s a difference between a pitch at the knees and a pitch at the belt for sure, but not much of a change between pitches thigh-high and at the belt.

Member
Member
Kenny Ocker
You can flag a comment by clicking its flag icon. Website admin will know that you reported it. Admins may or may not choose to remove the comment or block the author. And please don't worry, your report will be anonymous.

Is there enough data there to be able to look at the effects of elevated breaking balls/off-speed pitches versus elevated fastballs? I think there may be a difference between the two, but I’m not sure. I’m basing this off the logic of the “hanging breaking ball” that gets stuck up in the zone before being deposited in the bleachers.

Member
Member
James Gentile
You can flag a comment by clicking its flag icon. Website admin will know that you reported it. Admins may or may not choose to remove the comment or block the author. And please don't worry, your report will be anonymous.

yeah, or how velocity in general effects the HR rate. For instance, Pineda is said to live up in the zone, but as of last year he had enough heat to get away it. It is feared that once he loses a mph or two, more of those fastballs will be deposited into the bleachers as well.