Last year, we discussed the lawsuit that former Yankees top prospect and current Athletics outfielder Dustin Fowler filed against the White Sox for the injury he suffered after colliding with a concealed electrical box while chasing a fly ball at what was then called U.S. Cellular Field (a vastly superior name to Guaranteed Rate Field). When last we checked in, the White Sox and the Illinois Sports Facilities Authority (the two defendants in the case) had removed the case to federal court and were trying to use something called labor law preemption to argue that the case should be dismissed.

The White Sox invoked the Labor Management Relations Act (“LMRA”), a federal law Section 301 of which states that federal courts, and federal law, govern all employment disputes where the rights of the parties have been collectively bargained. The team argued that “Plaintiff . . . was injured as a result of an incident that took place only because he was employed as a Major League Baseball Player pursuant to a highly regulated contractual employment relationship that specified all of the rights and duties of the respective parties – including with respect to Players health and safety.” Here, the White Sox pointed to Article XIII of the CBA, which governs players’ safety and health, and included a committee set up to assess potential player hazards.

Fowler, of course, disagreed, and noted the limitations of the Committee created by Article XIII. 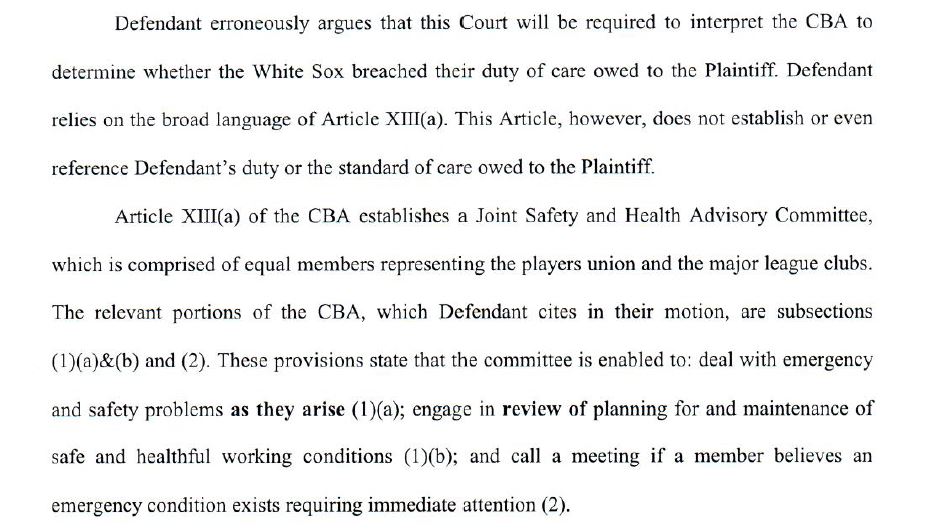 At the time, I noted that while the issue wasn’t clear cut, I thought Fowler had the better argument. Last July, Judge Gary Feinerman agreed with Fowler, sending the case back to state court for adjudication of Fowler’s state law claims in a blistering opinion.

A state law claim is not completely preempted where a defendant contending that the claim requires interpretation of a CBA advances a frivolous or insubstantial reading of the agreement; rather, preemption applies only where the defendant’s interpretation of the CBA is arguable or plausible. . . .But the White Sox’s reading of Article XIII [of the CBA] is not plausible.  No club could have reasonably believed, based on the text of Article XIII, that the Committee would be able to identify safety risks so comprehensively and effectively that, as long as the Committee raised no objections, the club could simply assume that nothing in its premises posed an unreasonable risk to players.

In other words, Feinerman concluded that the team’s argument was implausible on its face, because it provided a means for teams to ignore real hazards to players simply by deferring to the Committee’s judgment. To Feinerman, that argument represented an absurd interpretation of the CBA – not to mention one that would have significant negative public policy ramifications.

Article XIII leaves no doubt that the clubs were in a vastly better position than the Committee to assess the safety of their own premises.  The clubs did not give up any control over their premises to the Committee, nor did they even grant it any consistent supervisory role.  . . . When the Committee does address a safety concern, its recommendations are only advisory, leaving final authority over the premises with the clubs.  It would have been wholly unreasonable for any club to delegate its responsibility to ensure the safety of its playing field to the intermittent and weak Committee described in Article XIII.

That language – calling the Committee weak – was an intentional swipe at Major League Baseball. Judge Feinerman was, in essence, finding that Fowler was entitled to a remedy in tort law because the CBA didn’t provide an appropriate remedy, either through the committee or through arbitration.

Feinerman also emphasized that the electrical box being a hidden hazard made the team’s argument implausible because it improperly placed the burden on the player rather than on the team. It was not the job of the player, held Feinerman, to alert teams to hazards on the playing field.

That conclusion applies with particular force to a small, hidden hazard like the metal box that injured Fowler.  Because the box was hidden from players’ view … no player could have realized the risk it posed and attempted to convene the Committee to address the problem.  And it strains credulity to suppose (and the White Sox do not assert) that the Committee would examine such granular details of individual ballparks in its occasional meetings “for purposes of review and planning.”  It follows that the White Sox’s interpretation of Article XIII is not plausible, that the Basic Agreement therefore will not affect the White Sox’s duty of care to Fowler, and therefore that Fowler’s claims are not completely preempted under Section 301.

Feinerman concluded by calling Fowler’s claims “true state law claims,” and remanded the case to the Circuit Court of Cook County, Illinois, for a disposition on the merits; it remains pending there before Judge Kathy Flanagan.

I think Feinerman got it right here, even if, legally speaking, I thought this was a closer call than he did. That said, there’s no doubt that this case, for a lot of reasons, represents a possible sea change in how tort law will deal with these claims moving forward. Last June, in the context of Reggie Bush’s $12.5 million verdict against the Rams, I noted that victories like that were exceedingly unusual.

One of the main reasons for that is the issue of labor law preemption, which was raised in Bush’s case. And yet, in two major cases in consecutive years, a court has ruled that doctrine inapplicable in favor of applying state law tort claims. Feinerman’s ruling is a first for professional baseball, and carries the implication that teams are, in fact, liable in tort for injuries suffered by players as the result of on-field hazards. In fact, Feinerman’s decision could be read to require teams to adhere to the same duty of care towards athletes as they would towards any other person.

Nevertheless, Feinerman’s decision did contain some interesting limitations. First, Feinerman made a distinction between a duty owed by a team to its own players and a duty owed by a team to visiting players. While Feinerman didn’t explicitly say that a team doesn’t owe a state law duty of care to its own players, or that CBA preemption would apply in those circumstances, he nonetheless did state that a team’s duty to players not its own differs. On one hand, that makes a certain degree of sense, both from an employment law perspective (suing your employer is different than suing someone else’s employer) and a tort perspective (in theory, you will know your own home ballpark better than a visiting player will).

Second, Feinerman held that Fowler’s injury was reasonably foreseeable assuming all facts in the complaint to be true. That’s significant, because it essentially states that as a matter of law, hazards on a baseball field are reasonably foreseeable to cause injury where not expressly addressed by the CBA. That holding necessarily means that a team that camouflages a sprinkler, or an electrical box, or even an unpadded wall, could face liability if a player is injured coming into contact with it.

That doesn’t mean Fowler will necessarily win his case. The team may well have state law tort defenses, or Fowler’s legal team could prove unable to prove his case at trial for several different reasons. That said, we now have case law that the courthouse doors aren’t closed to a player who suffers an on-field injury during the ordinary course of a baseball game. And that’s a really significant development.

Has any outfielder been injured crashing into Wrigley’s unpadded ivy-covered walls? I’m imagining a scenario where Fowler’s case is used as precedent to sue the Cubs and.. get rid of the ivy, put in pads?

The walls aren’t exactly the same, because they’re easy to see and obviously made of brick. Part of the issue in Fowler’s case is that he bashed his knee on something small and unpadded that was the same color as the padded walls and railings surrounding it.

I think it’s a good question. I’m not a lawyer, but some of the differences between the Sox sprinker and the Cubs wall would be legally important, I believe. A key part of the judge’s statement was that it wasn’t plausible that the committee set up by the CBA would be responsible for knowing about and addressing all possible hard-to-see hazards on a field. The team’s argument in some respects boils down to “If you thought that was unsafe, then you should have complained about it to the committee, who should have made us fix it”.

And that argument was rightly deemed implausible for the sprinkler, but would be a lot more plausible for the famous Ivy covered brick wall that everyone has known about their whole baseball lives. A judge could very well say that the players have had ample time and knowledge to address the brick wall issue through that committee, and by not doing do, they’ve acknowledged that the existence of the wall doesn’t constitute a breach of duty of care by the Cubs.

I am a lawyer — although not a personal injury lawyer — and I see a very obvious legal distinction between the two. Wrigley is famous for its ivy-covered brick outfield walls — every player knows about them. When a dangerous condition is “open and obvious” it’s a lot harder to find liability for personal injuries than when a condition is hidden. The fact that Wrigley’s outfield wall is made of unpadded brick is known by every Major League baseball player; the fact that this one particular spot in… sigh… “Guaranteed Rate Field” was unpadded but was painted to blend in with the padding was not known by every player in Major League baseball.

For a comparison, think of it like this: everybody knows that demolition derbies are dangerous, and so if you crash your car into another car in a demolition derby and hurt yourself, you should have seen that coming (the legal term is “assumption of the risk”), and nobody is going to have to pay you for your injuries. Conversely, everybody knows that bumper cars are not dangerous, and are specifically designed to run into other cars without anybody getting hurt. If you get into a bumper car, and one spot in the bumper — painted to look like the rest of the bumper — is actually made of explosives, if you get injured when the bumper explodes, it’s probably going to be a legal problem for the owner.

why limit it to Wrigley? If you want to use that thinking, expand it-has ANY outfielder ever been injured crashing into ANY wall, anyplace?