Even though they’re only five games removed from a playoff spot in the American League, you could be forgiven for not having dedicated much thought recently to the Kansas City Royals. Prior to the trade deadline, they were playing a little over their heads, exiting July in possession of a 55-49 record and the second Wild Card spot — this, despite having recorded roughly equal runs scored and allowed totals. They became moderate buyers, picking up Melky Cabrera and holding on to soon-to-be free agents Lorenzo Cain, Eric Hosmer, Mike Moustakas, and Jason Vargas.

In the meantime, however, they’ve struggled, going 18-27 since August 1st. With a .490 winning percentage, the club now possesses just a 1.8% chance of making the playoffs.

Because the Royals have likely flown under your baseball radar, it’s quite possible that this bit of news did, too:

Ned said Kelvin Herrera is being bumped from closer's role for awhile. Minor, Alexander and Maurer will split duties.

The Minor to whom Flanagan refers here is Mike Minor, a name that, prior to this April, hadn’t graced a major-league box score since 2014. The last any of us had probably heard, Minor was signing a two-year deal with Kansas City last spring. At the time, the left-hander was coming off a torn labrum that led to shoulder surgery and, ultimately, his release from the Atlanta Braves.

The thought of Minor returning to form after such a serious injury was, while not ridiculous, still optimistic. However, despite some false starts and a rough stint in Triple-A Omaha last year, Mike Minor has reemerged as an effective relief option out of the Kansas City bullpen, exhibiting both increased velocity and a greater reliance on a reinvigorated pitch.

Before we talk about the current iteration of Mike Minor, we should take look at his past. Drafted seventh overall after a stellar collegiate career at Vanderbilt, Minor made his major-league debut on August 9, 2010, less than 14 months after he was drafted. A breakout 2013 season (3.5 WAR, 3.37 FIP over 200 innings) in his age-25 campaign distinguished Minor as a pitcher to watch. Shoulder soreness led to a down 2014, however, and represented an unfortunate preview of things to come. His 2015 campaign ended before it started, as Minor was shut down and then required surgery for a torn labrum. In the process, Minor joined Brandon Beachy and Kris Medlen as a sort of lost generation of Braves pitchers.

For all the press dedicated to sprained ulnar collateral ligaments (and the resulting Tommy John surgery), torn shoulder labrums may be an even more serious injury. While the prognosis for such injuries might be a little better these days, the conclusion from this 2013 paper still paints a rough picture:

In this systematic review, the rate of return to elite baseball pitching following surgery was 68% at a mean of 12 months postoperatively. Twenty-two percent of MLB pitchers never pitched again in MLB following shoulder surgery. Performance tended to decrease prior to surgery and gradually improve postoperatively, though not reaching pre-injury levels of pitching.

While there have been some sucesses with this surgery (Curt Schilling in 1995 and Michael Pineda in 2012), there was definitely no guarantee that Minor would return, much less become the Royals’ third-best pitcher by WAR. What has made Minor to make him so effective this year, en route to free agency?

The most obvious and expected change can be found in Minor’s fastball. Like so many starters who get moved to the pen, Minor has experienced a bump in fastball velocity. However, Minor’s increase of 3.3 mph sits in the 96th percentile of average fastball velocity (from a sample of 300 pitchers since 2007 who have thrown at least 30 IP starting and 30 IP in relief). A pitch that previously sat around 90-92, Minor’s fastball now hovers in the 94-96 range, with the potential to reach a blistering (considering where it was) 97. With that velocity increase comes a slight uptick in vertical movement and a significant decrease in lateral movement.

That loss of movement doesn’t seem to have hurt the fastball’s effectiveness, which is now worth nearly four runs more per every 100 pitches than in 2014. Batters have made contact approximately 10% less often, both in and out of the strike zone, and have done less damage on contact.

That said, Minor’s fastball isn’t impressive enough on its own. In order to be effective, Minor needed a complementary pitch to round out his arsenal.

That complementary pitch has emerged in the form of Minor’s improved slider. What had been, at best, an unremarkable pitch (worth -0.5 and 0.4 runs per 100 thrown in 2012 and 2013, respectively) and, at worst, downright dreadful (-2.6 in 2014) has morphed into a reliable second weapon. The higher velocity from his move to the pen is present, although once again Minor exhibits a higher-than-usual increase at 3.9 mph (99th percentile). Paired with an increase in horizontal movement, the result is a nasty pitch, especially against left-handed batters (who are slashing .175/.250/.225 against it).

The results bear out the deadliness of this new slider. Batters now chase the pitch more readily, and Minor has been leveraging this willingness to chase, recording nearly as many whiffs as balls in play. When opponents do get a hold of the pitch, they do (little) damage to the tune of a .063 ISO on 13.8% line drives. And Minor, with reason, now trusts the slider quite a bit, more than doubling its use, nearly to the same amount as his fastball.

Where Mike Minor goes from here is an open question. He has a mutual option in 2018 for $10 million, which seems like a luxury for a Royals team with several bigger questions that need to be answered. Minor has only been in this relief gig for five months, and his performance in higher-leverage situations has left a little something to be desired. (He’s recorded a 5.34 FIP in high-leverage situations versus roughly a 2.00 FIP in low- and medium-leverage ones). He’s also had a little homer luck, represented by an xFIP that sits nearly a full run (3.60) higher than his FIP (2.68). Finally, whether justified or not, there will be concerns about Minor’s shoulder. If reinjured, it would would lead to an incredibly difficult recovery.

Despite all this, there still might be some room for growth as a relief pitcher for Minor. Despite having debuted over seven years ago, he’s still just 29. His recent past as a starting pitcher makes him an attractive possibility as another of the multi-inning relievers who are driving interest these days. In some ways, he still pitches a little like a starter, using a subpar curveball (-1.5 runs/100) and mediocre changeup (-0.1 runs/100) nearly 18% of the time. While the changeup has been effective in the past, it’s currently a clear third option to the fastball/slider combination upon which Minor could rely even more heavily if he chose. Further, it appears as though he’s still learning to attack the top of the strike zone with his fastball, an area that was a little more off-limits when that pitch was thrown at 90-92. Working up in the zone has the potential to generate more swings and misses off his fastball, leading to the possibility not only of surviving but excelling in the role.

In any event, the return of a formerly promising pitcher from a potentially career-ending injury should be celebrated. The conversion of a starter to relief and the corresponding improvement of the stuff should be noticed. And when a player is a top-five performer at his position (and for pitchers, handedness) in his free-agent walk year, that player should be discussed. Mike Minor simultaneously fits all three of those criteria — all while receiving much less attention than if he were plying his trade in, say, Fenway Park. But teams outside of Kansas City have doubtless noticed, and when the offseason begins they will surely be waiting and hoping that they’ll have the chance to go after a quality reliever who, even 12 months ago, was off the radar almost entirely.

Minor has slowed down noticeably in the 2nd half, likely due to the workload of his first season back (and he’s been used a lot this year for a struggling KC bullpen).

The stuff doesn’t seem to have appeared to fallen off really, but the results have been more good reliever than great reliever.

The first half he might have gotten a bit lucky on fly balls (2.4% HR/FB%) but he doesn’t appear to be getting unlucky in the 2nd half. 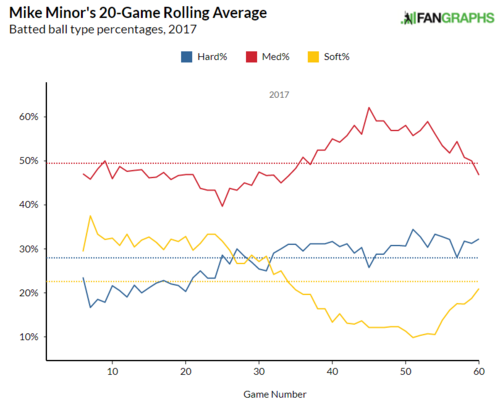 He’s very interesting and I think he’s a good reliever that is worth a multi-year deal. I’ll note also that he’ll certainly be a free agent as Dayton Moore uses mutual options as just a way to defer money, like a buyout.

This is better than the article!

Regarding the column – since we’re talking about returning to previous “elite” level performance, wouldn’t it be more informative to compare Minor’s 2013 numbers (rather than his “down” 2014)?

I wouldn’t say it’s better than the article. Stephen did a great job.