Baseball in Japan Is Surprisingly Similar

With two important players coming to Major League Baseball from Nippon Professional Baseball this season — Miles Mikolas and Shohei Ohtani, of course — we’re hearing a lot about how differently baseball is played in Japan. While it’s true that they take Mondays off and starters generally pitch just once a week, it’s also true that some of the differences between the two leagues are probably overstated.

Part of that might have something to do with the metrics on which we dwell when discussing the two leagues. Home runs certainly receive a lot of attention. Velocity readings, too. But what about other aspects of the game?

Curious, I decided to look through the lens of plate discipline and batted-ball spray to see how similar Japan’s league is to America’s leagues, major and minor.

Our minor-league data is subject to stringer bias that’s probably more intense than most of the other numbers — there are a lot of minor league parks, and it’s hard to know how great data is — but, as a comparison, we can include our minor-league numbers here. Here’s how players in Japan, as a whole, swing and don’t swing, compared to how they do stateside.

First-pitch strike percentage is defined differently in Japan — or, at least it is on DeltaGraphs, the site from which I’ve gathered this data. Kazuto Yamazaki confirmed that it’s all pitches in the zone on the first pitch, while the one on FanGraphs is all strikes on the first pitch, swinging, fouled, or taken.

Otherwise… baseball is played the same way at the plate, it seems. For all the talk that the NPB is contact-oriented league whose batters swing more often, the differences are minor. Compare the difference in contact rate between NPB and MLB (1.4 points) and MLB and High-A (9.7 points). The contrast is stark.

We can use also this information to appraise specific players, too. Like Shohei Ohtani. Using his raw plate-discipline stats, let’s find a few players who look like he does at the plate, focusing on reach rate, swing rate, and zone contact rate.

There’s a lot of swing and miss in Ohtani’s game, which could obviously cause problems. Even after accounting for that, though, this group of players seems strong. He’s probably most similar to Chris Davis, which means he’s walking a fine line as a hitter. He’s going to have to convert that massive raw power into game power or it might not work at the plate. At least he’s coming into a game that’s more friendly than ever before to poor plate discipline when paired with power.

Let’s look at batted-ball stats in the various leagues, which come with the same caveat about stringer bias.

While the opposite-field percentage is about the same in Japan as it is in our domestic league, there’s some truth to the idea that batters in the NPB spray the ball more. They certainly go up the middle and pull less often than hitters in Japan do. So the fact that Ohtani only goes opposite field 23% of the time doesn’t make him an American-style player necessarily. He still goes up the middle (42%) far more than he pulls (35%).

That means that he goes center 1.2 times as often as he pulls. Power hitters who had a similar spray chart in America include Khris Davis (1.23), Miguel Cabrera (1.14), and Eric Hosmer (1.14). The rest of the hitters in that range are generally spray-hitting speedsters like Ender Inciarte (1.27), Odubel Herrera (1.23), Dee Gordon (1.23), and Jose Peraza (1.21). It’ll be interesting to see if Ohtani changes his approach in America to play for more power.

Our eyes also go to the differences in line-drive rate between NPB and MLB. DeltaGraphs’ executive officer Yoshiki Masaki explained.

I reached out to a source familiar with Trackman data in Japan and was told that the launch angle in Japan is slightly lower than the one in America but not more than you might expect from random variation. So, functionally, the only difference between the two leagues is that there’s a little more pull power in America.

Because of the talent difference, you still see an effect when you translate numbers from Japan to America. Many of the pitchers who’ve come over have seen their ground-ball rates go down precipitously in America, as Alex Chamberlain noted in his search for a Mikolas comp.

Given that Mikolas thrived on called strikes and ground balls in Japan, and that these things look like they happen in similar quantities in Japan and America, you might want to refine Chamberlain’s list to those pitchers with lower swinging-strike rates. We could also focus on breaking-ball pitchers, since Mikolas has gone to the curve more often in Japan and doesn’t throw the change much. If you do both of those things, the names that make the most sense are Gio Gonzalez and Jose Quintana. And since command is his greatest strength, it’s really that second name that carries the most intrigue as a comp.

It might also be interesting to point out that Mikolas got his called strikes against some odds. There’s some evidence that foreigners — or gaijin, as they’re called — get fewer calls in Japan’s NPB. They see more strike calls by 1% at least. When NEIFI’s Adam Guttridge spent a month in Japan studying the game, he took video of some of the most demonstrative strike calls he saw. The two that stuck with him were both foreigners, with Carlos Peguero’s beauty below taking the cake. 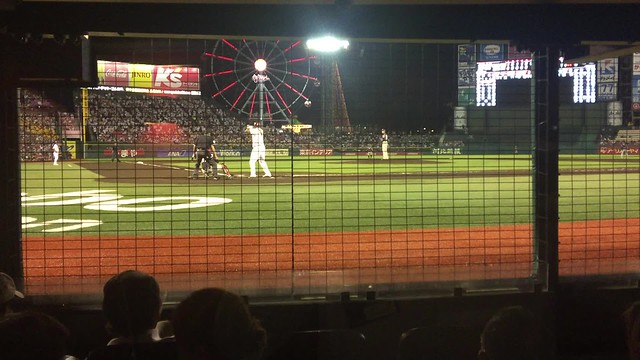 Before we point to this as being different from Major League Baseball, though, and say that Mikolas will surely get more called strikes stateside, we have to remember that there’s evidence that Major League Baseball’s umpires share similar biases. Race, reputation, and star status have all been shown to move the needle on strike calls in America.

The talent level in Japan is a little different, so outcome numbers should be translated. But when it comes to how the game is played — how often batters swing, reach, hit to the opposite field, or hit ground balls — there are fewer differences than you might expect. Expect these two superlative Japanese stars to translate their games into MLB-ese with minor bumps along the way.

They sell beer until the last out of a game so in many ways they are superior.

A less letigious society? They can’t drink more beer in Japan than they do in America…?!

It’s because none of the drive home. When I was in Japan people would not only not drive, they would sometimes travel as far as Hiroshima to Osaka after a game. That’s how fast the trains are.

That’s not to say the trains are so fast that the 200-mile trip is fast for daily purposes. That’s still a 2.5 hour train ride.

While it’s not unheard of for some people to travel that long for US sports games, it should also be noted that a larger portion of the Japanese population will take commutes that long for work — often by necessity because the Cost of Living in Japanese urban centers is so ridiculously high.