Checking In on the Aging Curve

Every season, we brace ourselves for the inevitable decline of baseball’s stars of yesteryear. Unfortunately, we’re all getting older, and despite their rare talents and athleticism, major leaguers eventually lose production. But while each individual has their own rate of decline, generally speaking, we know a fair amount about how age affects hitters’ abilities: A typical player peaks around age 26 and gradually declines afterward in what we know as the age curve. For those fortunate enough to stick around into their late 30s. that decline becomes quite sharp.

The basis for the age curve is the difference between a player’s performance across two different seasons. The choice metric for hitters tends to be wRC+, because it’s adjusted for league average and should be less impacted by league-wide trends and fluctuations from one season to the next. The chart below shows an age curve for players using data from the last 10 seasons, preceding 2021: 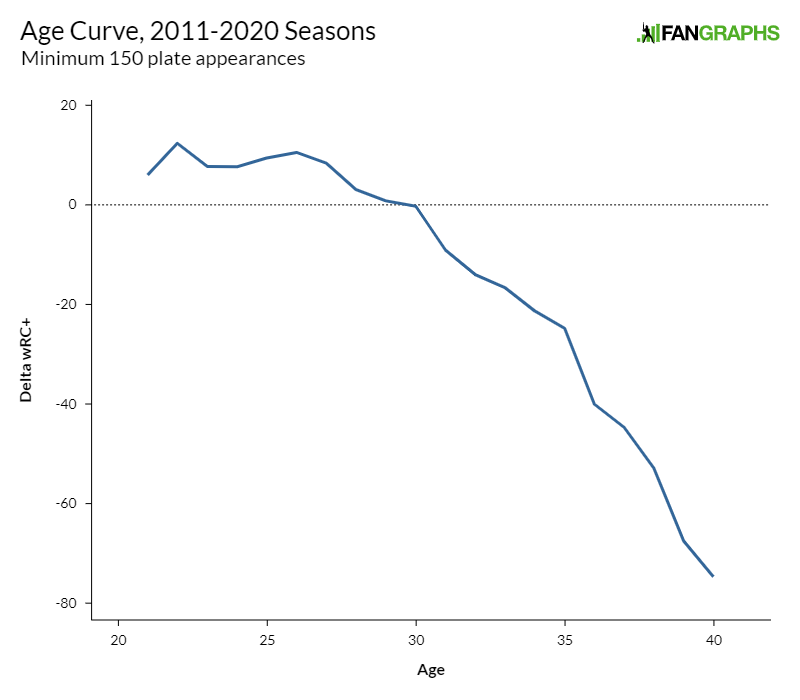 The shape of the age curve makes intuitive sense, for two reasons. The obvious one is that the primary skills needed to succeed in baseball (eyesight, strength, agility, etc.) decline as the human body gets older. Another, however, is that players only remain at the big league level if they’re successful. Whether it be due to injury, a slump, or even a little bad luck, a decrease in a hitter’s performance is an inevitability before they decide to retire (or the decision is made for them).

The box plot below shows these data are quite noisy when binning by age. The curve looks clean when applying the mean delta wRC+, but it’s clear that the distribution of results are wide for almost every single age, with wRC+ changes of 100 points from one season to the next. But as we approach age 35 and beyond, the samples get noticeably smaller, and the distribution gets a little tighter. 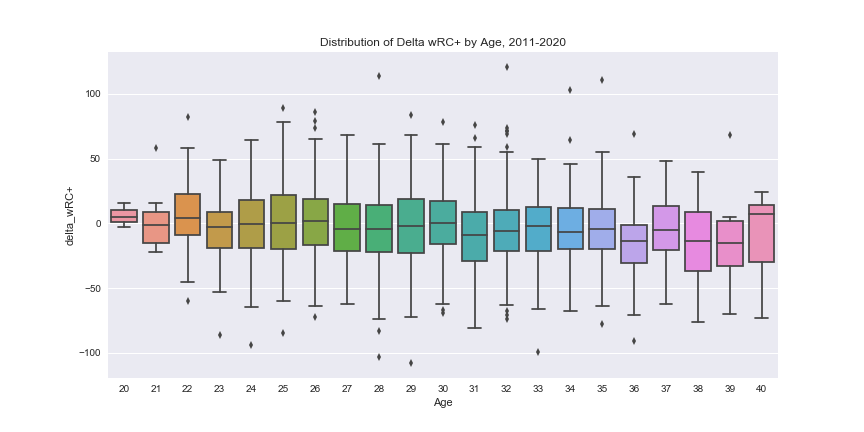 In order to get a valid data point, we need one player to have at least 150 plate appearances in both the “age” and “age-1” seasons; otherwise a delta wRC+ cannot be calculated. Fewer and fewer players meet these requirements at 40.

There is a high degree of variance in the age curve data. For the most part, there is an almost equal chance a player improves upon his prior season’s performance or declines, with the average falling slightly above or below zero. The table below shows hitters age 35 or older and their respective gain or loss in wRC+ compared to the 2020 season.

Three players sit atop the list: Gurriel, Longoria, and Votto, all of whom just wrapped up their age-37 seasons. We’ve covered these hitters at FanGraphs throughout the season, so I want to focus a bit more on the historical context.

On a macro level, even with the small sample artifacts you would expect coming out of last season, hitters followed a similar pattern as previous seasons would predict, with an average delta wRC+ of -1.7 among hitters over age 35. That is, though, a lot smaller than what the age curve has projected in the past: a drop of roughly eight or nine points of wRC+ on average. A lot of that is likely thanks to Gurriel and Longoria; the former had the third-biggest year-over-year increase in wRC+ among hitters 35 or older over the last ten years. (That may also be false advertising caused by last season: Gurriel’s wRC+ figures have gone from 133 in 2019 to 78 in ’20 to 134 this season.)

In the last decade, the most hitters aged 37 or greater who have seen their wRC+ improve by 30 or more points in a season has been four: David Ross, Carlos Ruiz, Ichiro Suzuki, and Victor Martinez, all in 2016. There had been no more than one such player in any other season until this year, when Gurriel, Longoria and Votto did the heavy lifting — and all in slightly different ways.

Before the 2020 season, Jeff Zimmerman examined aging curves for some specific plate discipline and power metrics (BB%, K%, ISO, and BABIP) and discovered that the impact of age on a hitter’s strikeout rate has increased significantly in recent years. Gurriel was able to stave off an age-impacted increase in that stat, but Longoria and Votto saw theirs jump by nearly five points each. When we see a correlation between K% and age, most of us probably think it’s primarily due to more swings and misses. That holds true for Votto, but his increased SwStr% is in part due to his newly aggressive approach. As Jay Jaffe wrote when covering his late-July power surge, “Votto’s success this year is a manifestation of his decision to trade plate discipline for power.”

Looking at each slugger’s performance compared to last season in each metric illustrates their paths to bucking the age curve in ‘21.

For each, they’ve managed to succeed in overcoming age’s typical impact in at least two areas. Gurriel’s huge jump in BABIP is a big driver behind his improved offensive performance, but it seems that his results from 2020 were subject to small sample bias and not aging, as most of his stats this year resemble what he accomplished in ‘19. Longoria and Votto, meanwhile, both rediscovered some power, although each did so differently. Votto’s came via a more free-swinging approach, and Longoria simply made harder contact, with career-high hard-hit (54.6%) and barrel (13%) rates, to go with more walks.

Another variable needs to be considered when addressing these and other veteran players’ performances this season: Did the reduced workload from the shortened 2020 season help? Given that Gurriel, Longoria, and Votto have 8,377, 8,716, and 11,269 career plate appearances between them, respectively, you would surmise that a partial workload might rejuvenate them. Looking at age curve data alone, the results are a bit mixed. 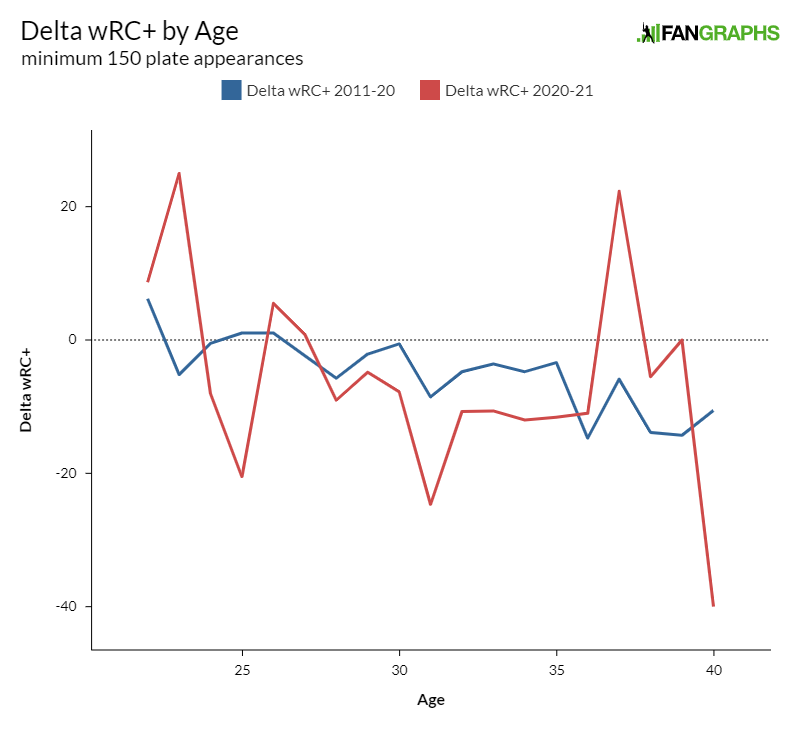 If you squint, you can see some sort of trend where the results for hitters between ages 28 and 35 are performing a bit worse than the curve suggests. In contrast, for players in their age-36 season or later, it would appear that they are overperforming. There’s not enough data from one season to come to a conclusion, but if there’s any signal in this noise, it suggests that there was a subset of veteran players who benefitted — those 36 and older — and a subset that did not (the 28–35 group).

As I alluded to earlier, the age curve is a useful illustration of what happens to player performance over time, but the wide range of outcomes means that almost anything can happen for any given player in a season. Gurriel, Longoria, and Votto each carved out unique paths to improvement in spite of getting older. Maybe other players can and will follow suit to adapt similar approaches.

Doesn’t the 150 PA thing introduce a large survivorship bias, in that only players good enough to play that long are counted?
Also, this is majors only. There are probably good young players in the minors who are good enough to play this year, but not last year.
I’m a bit surprised that the logic behind aging charts hasn’t changed that much in the last 10-15 years.

Re: bias, I don’t think so– your target population is MLB players, who are subject to the same attrition. It would only be a bias if you were interested in how the wider population of MLB players would perform if they were forced/guaranteed to stay in baseball until age 40.

If I’m looking at a 34 year-old free agent this offseason who posted a a 110 wRC+ last year and I want to predict what his wRC+ will be this year, it doesn’t really help to be able to say “well, assuming he’s not *so terrible* that he gets canned before 150 PAs, then, on average, he’ll probably have a ~103 wRC+”. There is a non-zero chance that this free agent *will* be so terrible that he gets DFA’d by mid-May!

Yeah, I think the truth is somewhere in the middle. There’s some survivor bias for examples like this, certainly. But I think we’d want the expected production from a 35-year-old conditional on having played in the bigs at age 34 (i.e., you don’t want data from guys who washed out at age 27 to pollute your estimate).