The Yankees haven’t been able to catch many breaks to start the season. They have an insalubrious number of starters on the injured list with everything from a small labrum tear, to a strained oblique, to a left biceps strain, to a left ankle injury, to a grade 2 lat strain. Despite all that, the team itself, at least when it comes to the standings, isn’t doing badly. They just won nine out of their previous 10 games and are one and a half games back from the Tampa Bay Rays. As of April 29, the Yankees are currently tied with the Astros for the fifth-best winning percentage in the majors (.607).

In the middle of all that is Domingo German, who’s off to a stellar start. We at FanGraphs have noted his talent before, citing his arsenal, his ability to throw strikes, get whiffs, and more. We’re talking about a guy who can make hitters look like this:

The odds of a pitcher with a 5.57 ERA making a contending team’s rotation are long, but lo and behold, German did it. He entered 2019 spring training as a fifth starter candidate to pitch behind Luis Severino, Masahiro Tanaka, James Paxton, and J.A. Happ. He ended up getting a spot due to his strong spring performance and Severino’s shoulder injury. And so far, German has been lights out. Here’s how German has ranked among major league starters so far this season:

Part of this might be that he hasn’t faced, well, the strongest lineups in the league. He made starts against the Tigers, Orioles, Royals, Angels, and Giants, and a relief appearance versus the White Sox. None of those teams rank above 14th in team wRC+. At the same time, it’s perfectly fine to give German credit for performing well against these offenses; good pitchers are usually able to do that. Besides his first start of the year, in which he allowed five walks against Detroit, German’s been able to keep his free passes to a minimum. He has also allowed only 18 hits in 31.2 IP while striking out 32, which indicates how good his stuff is.

Sometimes it isn’t too tricky to diagnose and explain a player’s breakout, but sometimes it can be. Looking at German’s arsenal data from Statcast, nothing has significantly changed. His spin rate numbers are slightly down, but it’s nothing major. He’s throwing his fastball/sinker and curveball at roughly the same rate as last year, so there hasn’t been a huge arsenal overhaul. It might come down to something as simple as him commanding his pitches better and being more comfortable pitching in crucial situations.

First, let’s get to the command. You can point at his lower walk rate, but that’s not the be-all, end-all indicator of improved command. It’s trickier than that. For this, we might borrow the powers of the heat map to see how he’s been locating certain pitches. I started with his fastball. Per Statcast, German allowed a .226 BA with a .560 SLG on his four-seam fastball last year. So far in 2019, it’s improved to a .167 BA with a .375 SLG.

This is how German located his four-seamer in 2018: There are significantly fewer deep red squares in the middle and middle-high parts of the zone. Instead, he’s thrown more towards the edges – particularly to the inside for right-handed hitters and outside for lefties. He is still prone to leaving fastballs up in the zone once in awhile, but it’s a noticeable improvement.

There are a lot of possible explanations for this. Part of it, of course small sample size. But the difference is stark enough to warrant some consideration. What I want to look at is his delivery. There are subtle changes he has made that indicate he’s trying to stay taller and maintain stability in his delivery. In order to illustrate my point, let’s compare the two.

Here is German’s delivery from 2018, missing badly with his curveball.

And here’s his delivery from this year, locating his curveball low in the zone for a strikeout looking.

There might not be an obvious difference at first glance. He still has the same kind of arm action, has about the same rhythm, leg kick, and similar follow-through, but one thing that stood out to me is how he looks much more upright and stable during the stride in his 2019 delivery. Here’s the key point in 2018 and 2019: 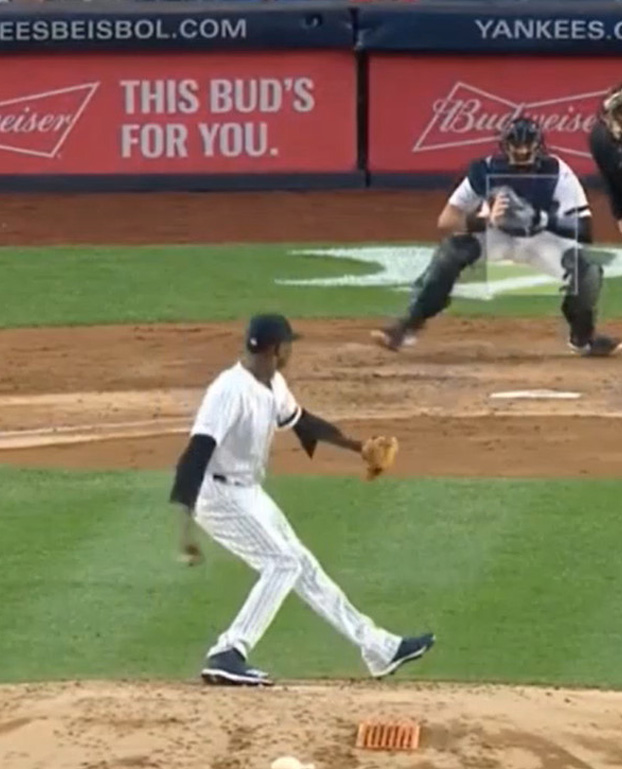 This is after his hands separated and he’s about to stride out. In the 2018 screenshot, his glove-side hand, which is leading the body on its way to the plate, looks like it just kind of “hangs” in front of the body. It looks much more stabilized in the 2019 screenshot, as he’s “pointing” and directing his energy more with his glove hand than before. His posture is also taller; the glove-hand stabilization could be a helping factor in that. 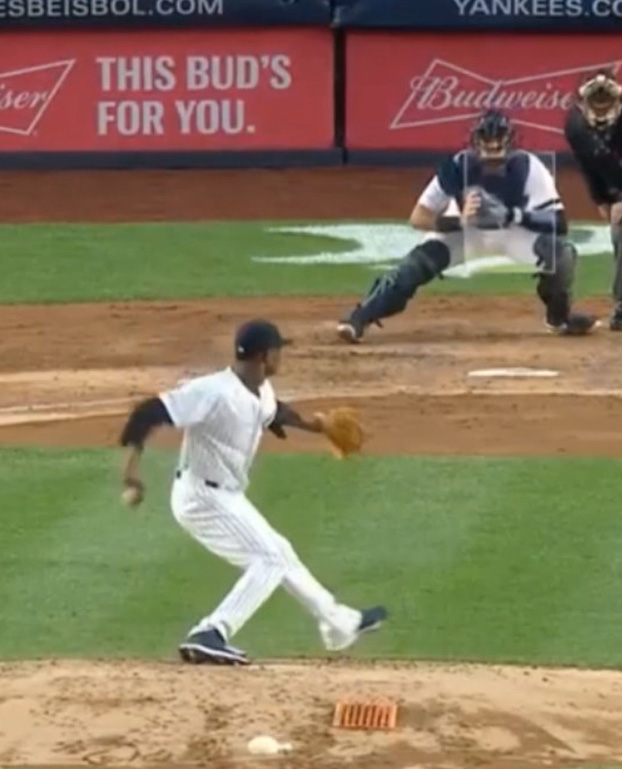 After a few frames, German is striding out. You can see now that he’s continued the trend from the beginning of each delivery: in 2018, he’s striding out with a bit more hunched posture, with less glove-side stabilization, whereas in 2019, he’s a bit more upright while his glove hand is pointing to the target a bit higher and looking much, much more “in place” than last year. 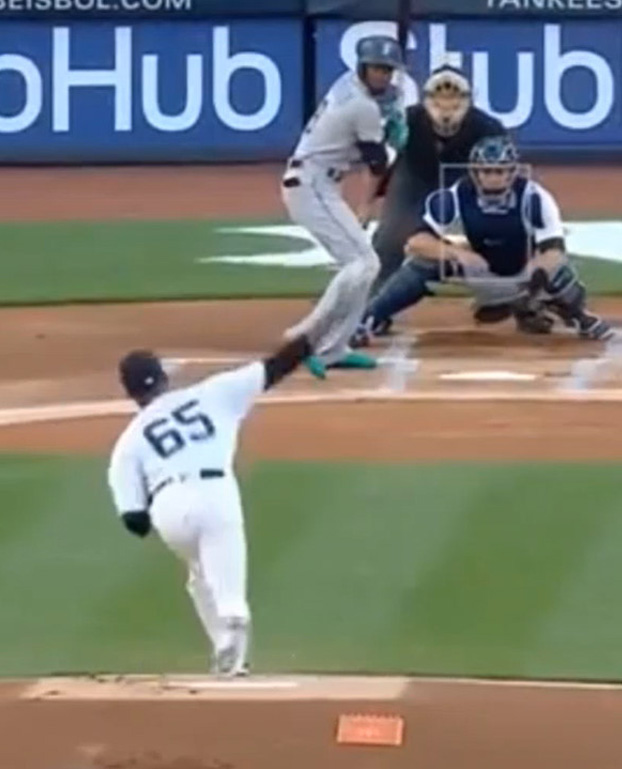 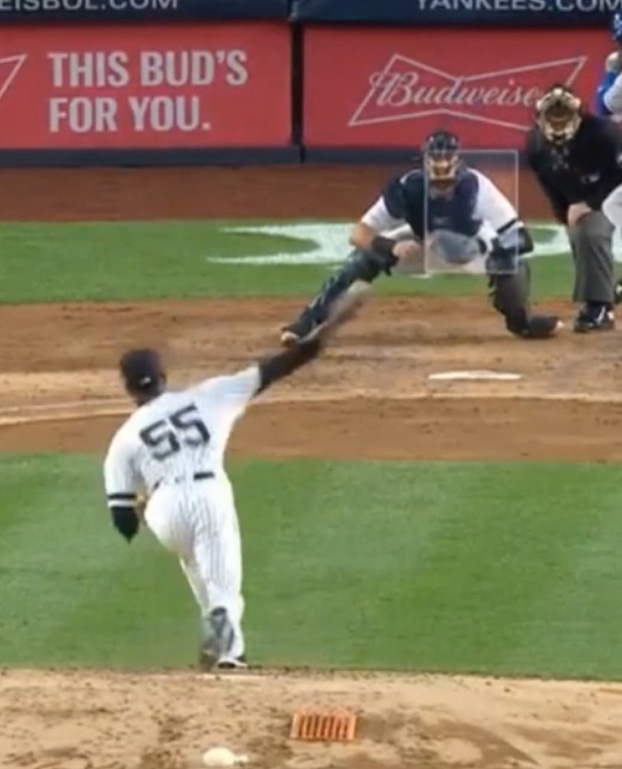 At release, it’s pretty hard to tell the difference, but here’s what I see. Notice how his trunk is leaning more towards the left in the 2018 picture, with no gap between his body and left arm. In 2019, his trunk is still leaning towards left at release but there’s a separation between his body and his glove arm. That tells me that he’s stabilized his glove arm and is much more in line to the target, which, in theory, helps him find a better release point for command.

To reiterate what I pointed out, here’s a slow-motion capture of the delivery parts I mentioned. The front arm and torso positioning at the end are the keys:

Can you feel how strong his front-side looks now? Personally, I can feel German squeezing his glove. My theory is that, with the newfound stability throughout his delivery, German has been able to find better balance from start to finish, which helps with overall consistency whether he has or doesn’t have runners in scoring position.

German is one of the reasons the Yankees are staying afloat despite a gargantuan injury situation. It is too early in the season to say that he’s transformed into his current 2.56 ERA and 2.78 FIP, but he can be much better than the 5.57 ERA pitcher he was in 2018 as well. This kind of improvement in a young pitcher is far from unprecedented, especially for a talented pitcher whose fastball’s been compared to Max Scherzer’s. It’s hard to say that the Yankees have a new, long-term, top-of-the-rotation starter, because c’mon, he’s only thrown in six games this season, but there are reasons for Yankees fans to be optimistic about his development.

Love German for this year. He was the 3rd best starting pitcher last year according to wPDI (Weighted Plate Discipline Index).