No One Will Want to Face These Yankees

You’re probably aware that the torrid Cleveland Indians have taken over the top run-differential spot in baseball and the No. 1 playoff seed in the AL.

You’re probably also aware that the Dodgers still hold the best record in baseball despite looking beyond terrible in September.

But did you know the Dodgers no longer hold the No. 2 run-differential spot in the sport? It’s true. That distinction now belongs to the Yankees, who entered play Monday having outscored the opposition by 62 runs (191 runs scored, 129 runs allowed) since August 14. And following last night’s victory over Minnesota, New York has now won 20 of their last 31 games.

You could make the argument that the Yankees are the second-best team in baseball. You could also make the argument that they’ve been the unluckiest, underperforming their expected record by nine wins according to BaseRuns, the worst mark in the majors. The Astros, Dodgers, Indians, and Yankees are the only four clubs in baseball currently averaging a run more per game than their opponents.

Somewhat lost in the shadow of the Indians’ record streak and Boston’s lead in the AL East is that the current version of the Yankees is stronger on paper than a number of division leaders.

The Yankees have just a 10.0% chance of winning the AL East, according to FanGraphs, and those odds might be a bit conservative. But should they get beyond the AL Wild Card game — they will likely face the Twins in that contest — they’re a club that few others will want to face. The Yankees have the best division-series odds (61.1%) and World Series odds (5.7%) of any non-division leader. The Yankees can hit and continue to hit.

Over the last 30 days, the Yankees offense has produced the fourth-most runs (166) and fifth-best wRC+ (108) in the sport. Todd Frazier has shown some life, Aaron Judge has put his slump behind him, and Didi Gregorius continues to lengthen the lineup, posting a 112 wRC+ and 24 home runs this season with little indication of relenting.

But it’s the pitching that has a chance to really lead the way.

After Corey Kluber and Chris Sale, Luis Severino has arguably been the third-best starting pitcher in the American League this year. Only Kluber and Justin Verlander have been more dominant than Severino in the second half in terms of actual runs allowed (2.93 ERA), and Severino has also produced the second-most second-half WAR (2.5) among all starting pitchers. Severino’s considerable gifts are becoming skills.

The Yankees could put together a formidable postseason rotation after Severino, too.

Masahiro Tanaka has a 22.9-point K-BB% mark in the second half, during which period his ERA is a full two runs lower than during his first-half struggles. Sonny Gray has pitched like a No. 2 for most of the season, owning ERA/FIP/xFIP marks of 3.38/3.62/3.58.

In the bullpen, meanwhile, the Yankees (somewhat believably) are missing bats at a historic rate.

For the season, the Yankees bullpen leads baseball with a 28.9% strikeout rate, is second in relief WAR (8.1) and fourth in K-BB% (18.8). The club appeared to have a strong bullpen entering the season, and it was at the deadline that Brian Cashman elected to buy, building a super bullpen in the process.

In addition to Dellin Betances and Chad Green, and Aroldis Chapman — whose velocity has inched back up recently — the Yankees added both Tommy Kahnle and David Robertson in July. Kahnle has continued to strike out everyone in New York and the Yankees could become the first bullpen to feature five pitchers with strikeout rates of 30% or greater. Green (42.1%) and Betances (39.4%) could very possibly end the season above the 40% mark.

While there have been some hiccups, the team’s attempt to construct a super pen appears to be paying dividends. Over the last month, the team’s relievers have produced a major-league-best 31.9% strikeout rate as a group.

They Yankees weren’t supposed to be here, approaching the end of September with a plausible shot at a division title and a very real chance of pulling off an upset in the postseason. But some young players arrived ahead of schedule. Severino became an ace. Cashman built a super bullpen and then acquired one of the best available arms in Gray. And while they may or may not be the second-best team in baseball (as the run-scoring numbers suggest), they’re well constructed for the postseason, featuring a few strong rotation options and perhaps the best bullpen in the game. The Yankees surprised some during the regular season and they might be ready to do more of the same in the playoffs.

Travis – As a Yankees fan, I really appreciate the flattering piece about our team.

That said, I am not as optimistic as you are because I feel (emphasis on feel, as in I don’t have hard data) that the Yanks are simply good at running up the score against bad teams AND have deep enough bullpen that people run up big deficits on us. And yes, we have been unlucky because Clippard, Betances, and Chapman collectively blew 6 games within a 3 week span.

My main point is that this article is predicated on our BaseRuns number. My concern is that we keep using that as a point estimate, instead of a distribution (of run differentials). Shouldn’t we be looking at what that histogram looks like over a season? Wouldn’t we see that gigantic spike of 1-run losses?

At the end of the day what I really care about is understanding if our distribution looks like that of the Dodgers, Indians, or whomever before I claim that we’re just as good.

The real question is, would that spike of 1-run losses be predictive? My understanding is that “running up the score against bad teams” has historically been a pretty positive indicator.

Jeremy – Really good point! There are actually two parts… one is understanding the distribution of scores and two understanding which behaviors are predictive.

Member
Member
dukebd555
You can flag a comment by clicking its flag icon. Website admin will know that you reported it. Admins may or may not choose to remove the comment or block the author. And please don't worry, your report will be anonymous.

I agree here. The team has a tough time in tight games and while I don’t have hard evidence behind this, their situational hitting has been awful and they frequently don’t drive in easy runs. The bigges thing going right now is how deep their lineup is. Really only frazier and bird are weak links and even those guys have hit a few home runs the last couple of weeks. Teams that pitch around Judge now get burned by didi Castro and even headley and ellsbury and with how deep they are they are immune to any pitching handedness

Member
Bryan
You can flag a comment by clicking its flag icon. Website admin will know that you reported it. Admins may or may not choose to remove the comment or block the author. And please don't worry, your report will be anonymous.

The Yankees haven’t been awful at situational hitting. The point is that they have had way more chances than most teams at hitting with RISP. For instance, if you look at the teams that average the most runners left on base per game, the teams with the most runners left on base, are the playoff teams. 30th is Cleveland. 29 is Minny. 28 is NYY. 27 are the Cubs. 26 is Arizona. And 25 are the Dodgers.

When you look at the aggregated data; the Yankees are 4th in the number of at bats with runners in scoring position. They are 2nd in runs. The avg leaves a lot to be desired (17th) but they lead the league in home runs with runners on. And have the 5th highest OPS.

So yeah…its more the offense has been so good that due to sheer volume, you are thinking the RISP has been terrible when in actuality they have been rather good.

Member
Joey Butts
You can flag a comment by clicking its flag icon. Website admin will know that you reported it. Admins may or may not choose to remove the comment or block the author. And please don't worry, your report will be anonymous.

So they’ve been good at the situational part, but bad at the hitting part? 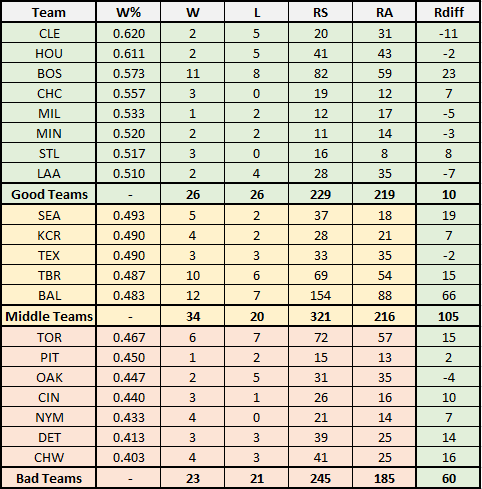 But as you can see they’ve fared much better on a run differential with the bad teams.

I think the top box makes sense, you wouldn’t expect them to dominate the best teams, but you would figure they would have done a bit better W/L wise vs the weaker teams.

Maybe what’s encouraging is they’ve done better vs the middle teams than any of the groups.

Member
sbwood999
You can flag a comment by clicking its flag icon. Website admin will know that you reported it. Admins may or may not choose to remove the comment or block the author. And please don't worry, your report will be anonymous.

This is my new favorite chart. Would love to see this for all contenders. Good work shauncore

I can give you Cleveland, though without the fancy chart.

Indians main problem this season has been against the NL. They’re 6-14 overall, including 4-6 against the Reds, Padres, and Giants.