The Weather of Park Factors

During the Sportscenter running before the start of yesterday’s World Series game, ESPN did a segment on some trends associated with cold weather* baseball. The numbers discussed ranged from biometric data (your grip strength and reaction time ability both decrease dramatically in cold weather) and some of the resulting baseball numbers such as that batting average drops and errors increase in cold weather.

*Link goes to one produced about football, but the same biometric data applies.

I do not think any of the above should surprise you. I found it fairly intuitive. I can recall with great clarity that my fingers do not seem as dexterous when suffering from cold. What I hadn’t done before though was make the explicit connection between the biological nuisances of cold and the dynamics of a baseball game. Think about how reduced grip strength can impact a pitcher. Some of his control is going to be diminished, but probably not evenly so as offspeed pitches require more of a grip than a fastball does. And writing of fastballs, think about how an increase in reaction time affects a hitter trying to distinguish between pitches and then make contact with a 90+mph pitch. 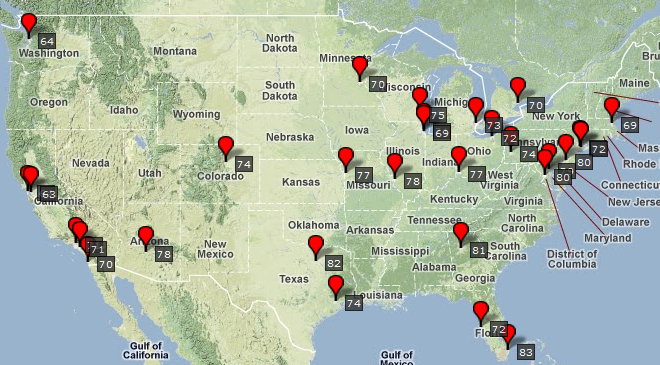 Oakland checked in with the lowest average temperature and Miami the highest. Most parks are where you’d expect, but surprises do exist. As not someone relying on a few visits and the stereotype, I never would have thought San Diego would be so low. Perhaps that’s an aberration, I’m not sure where Retrosheet gets their temperature data, but perhaps it reflects the reality of a coastal city.

A game played in 40-degree weather is different from a game played in 80-degree weather just as a game played in Arlington is different from a game played in Seattle. Obviously, but also the two are connected. Part of what makes Arlington such a hitter’s park is the higher temperature. Part of what makes Safeco such a pitcher’s park is the lower temperature. The effects get roped into and considered “park factors”, but they’re more factors of the environment than the park itself. The two are related, but worth remembering. Parks and their location have clear and subtle effects on the game. Where the sun sets, what the hitters’ eye looks like, where the wind blows in from, the height and configuration of the fences both in fair and foul territory are all examples. Temperature is another. Consider that decrease in reaction speed the next time somebody asks you how a park can impact strikeout rate.

I did an analysis a few years ago about the “carry” of a fly ball. Here is a link:
http://webusers.npl.illinois.edu/~a-nathan/pob/carry/carry.html. It involves a precise definition of “carry” and an analysis of the carry in different ball parks. The results confirm what you say: The carry is best in Denver (because of the altitude) and in warm-weather parks (Houston, Texas, Florida) and worst in cold-weather parks (Cleveland, Oakland, Seattle, Detroit, SF). And no evidence for wind-blown home runs in Yankee Stadium (the original goal of the study).

Except you didn’t look at fly balls, you looked at home runs. The fact that a ball made it over the fence should make you estimates of carry for a park larger than the true park factor. I would expect this to be the least of an issue in New York where many batters (home and away) can put it over the fence without any help.