Sometimes I’ll write a post I know is going to be popular. Like, some weeks back, I wrote about how the Cubs seem like the best team in baseball, and that was obviously going to be big. Sometimes the popularity of a post takes me by surprise. A good example would be when I wrote over the summer about Ryan Goins taking pitches and hitting other pitches hard. And then there are the posts almost exclusively for the nerds. For the nerdiest of the nerds. For the people who love thinking about baseball simply for the exercise. This is one of those. Nothing contained here is all that important, but this is the stuff I find most interesting, and I touched on this briefly last night when writing about Justin Upton on the Tigers. The Tigers play half the time in Comerica Park, and Comerica Park suppresses strikeouts.

I’ve written about some of these weird park factors before. The obvious park factors don’t require much explanation. It’s easy to see why there are more homers in Colorado. It’s easy to see why there are more triples in San Francisco. It’s confusing, though, to think about why some environments might increase or decrease strikeouts or walks. It feels like those things should happen independent of the ballpark, and the effects tend not to be huge, but effects do exist in some places. Detroit is one of them. People always ask how these factors can be. It’s never easy to know for sure, but that doesn’t mean we can’t have a conversation.

The first step should be confirming an effect actually exists. With Comerica, there isn’t much doubt. We haven’t updated our park factors yet for 2015, but our numbers from a year ago indicate Comerica keeps strikeouts down. And that’s a multi-year, regressed park factor, so it wasn’t just the result of a one-year fluke. This past year, individually, the effect kept up. Nothing big changed last season.

This is our history of Tigers park factors. You see that strikeouts have consistently been suppressed since around when Comerica opened. If you want a second source, here’s Seamheads.com. It shows the same thing for Comerica, even going so far as to break things down by handedness. Captured there is that the park became more homer-friendly — of course — when the fences were brought in. Yet the strikeout factor has never been close to average.

Maybe you get lost staring at a bunch of park factors. That’s completely understandable, especially when it’s not always clear how those things are being calculated. So here’s some raw data, covering the last five seasons, for the Tigers and for all of baseball, league-wide.

The average hitter strikes out a little less often at home, but the Comerica effect appears greater by two percentage points. And the average pitcher strikes hitters out a little more often at home, yet again, the Comerica effect appears greater by two percentage points. For the sake of a few quick examples, as a Tiger, J.D. Martinez has struck out 24% of the time at home, and 30% of the time on the road. Justin Verlander over these five years has a home strikeout rate of 22%, and a road strikeout rate of 24%. There’s something here. It seems so small, which is why this isn’t ultimately that important, but something unimportant can still be fascinating. What could possibly be happening?

Note that, while Comerica suppresses strikeouts, it doesn’t meaningfully suppress walks. This is in contrast to PNC Park, where both strikeouts and walks are reduced. I think the easy explanation there is that pitchers are just more willing to pitch to contact, because the park plays so extreme with batted balls. So counts just don’t get as deep. Because of the walks, I don’t think this would apply to Comerica as much.

Look at another ballpark at the opposite end. Turner Field, in Atlanta. Turner Field increases strikeouts. It didn’t used to, but the effect developed. Maybe not coincidentally, years ago they installed a new, hi-def video board. From Ballpark Reviews, here’s what it used to look like: 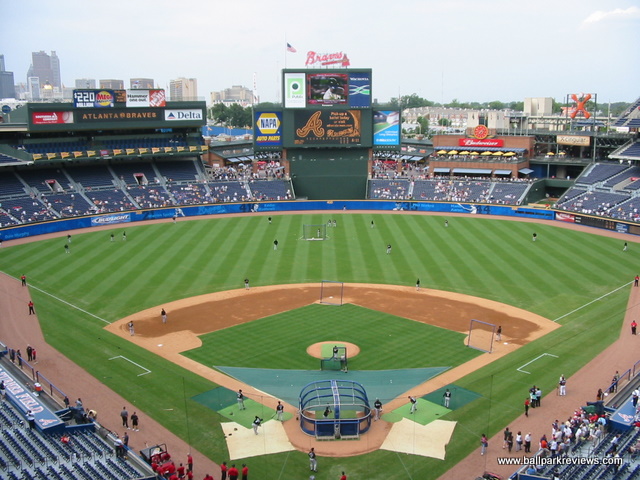 I’m not a hitter, and I’ve never stood in the Turner Field batter’s box during a live game, but I feel like this could be easy to explain. You’ve got a lot more that’s lit up in the outfield, especially with the video board in dead center. The batter’s eye is there and dark enough, but it’s got its own shadows, and then right above the backdrop is this bright massive display that could be distracting for hitters trying to pick the ball up out of the hand. In the past, the display was darker and simpler. Now it’s almost like headlights, at least in night games. That could be all you need to know. During a game, from Fair Trade Milwaukee:

Just from a quick glance, you can tell the backdrop remains pretty dark. There’s no video board anywhere close, and there’s even only very limited fan seating. So there’s not much in the way of potential distractions, it seems like, and maybe it’s also worth noting Comerica is oriented more toward the south than any other ballpark. In most parks, hitters are looking north or northeast. In Detroit, they’re looking almost due south, meaning the sun is behind the backdrop, meaning the sun isn’t reflecting at all off of the backdrop. Maybe that ends up balanced by other things — shadows, or, say, the sun being right there in the sky — but maybe some of this is a reduction in glare. It seems like the visibility in Detroit should be better. Certainly better than in Atlanta. And that could explain the weird park factors, because as much as hitters are trained to focus just on the pitcher, no one’s immune to being distracted, and there are definite differences in environment.

Comerica Park isn’t going to cure Justin Upton of his strikeout problem. Strikeout-prone hitters are strikeout-prone hitters anywhere. Yet it does look like Comerica Park is as good an environment as there is just in terms of the hitter being able to see the baseball coming from the mound. Maybe I’m actually wrong about the explanation, and the effect itself is hardly noticeable game-to-game, but this stuff fascinates me anyway. You’d think strikeouts are about the pitcher and the hitter. And you’d be right. Mostly.