Earlier this week, I made my on-the-record guesses for what would happen with some of April’s underachieving hitters. Now we’ll turn to look at the disappointing pitchers and the potential for more helpings of crow for me to eat come October.

Last year, through the late-season shoulder problems, I counseled people not to panic so soon on Sale. He’s Chris Freaking Sale after all. When the White Sox put him in the rotation in 2012, there was a lot of doom-and-gloom about how his pitching motion and his frame meant he wouldn’t survive long as a starting pitcher. But from 2012-17, Sale was one of the most durable starters in baseball and now he drinks overflowing pints out of the skulls of those pundits.

But now, I am quite worried, especially in the short-term. He’s shown he can occasionally dial it up as he did in the Yankees matchup, hitting 96-97 through most of the game. But his velocity is generally down, severely so in most games. He went three months without a start below an average of 95 mph last year. This year he’s only had individual pitches passing this mark in a single game (the Yankees one).

If this is the Sale that we have now, I do expect him to adjust in the long-term. But the Sale of 2018 had a highly edited repertoire. He’s essentially a fastball-changeup-slider pitcher who is amazing at changing the look of these pitches. He could throw his fastball anywhere between 88-98 and have it look like five different pitches depending where it was. In 2019, he’s Pavarotti with an octave taken away. His fastball is more one-note and hitters have realized it; of every 10 fastballs that batters swing at, one in 10 of those swings-and-misses from previous years are now being hit.

“But Dan, he’s just being cautious because of his shoulder!” That makes me even more worried if 10 months later, he’s still having to pitch in a way that makes him a less effective pitcher because of a shoulder issue. Elbow problems are bad, but shoulder problems are a whole new level of scary, like going from a haunted house at an elementary school carnival to a Saw movie. I’m hopeful in the long-term, but it’s a problem for Boston getting back into the race.

I think the hope with Alex Cobb is actually that he’s still not healthy. In 446 innings from 2012-14, Cobb’s baseballiary peak so far, his split-fingered fastball only resulted in eight total home runs. He’s already halfway there in three starts. And as we saw in 2018, Cobb’s effectiveness relies on his splitter not splitting the field-of-play. As for Dylan Bundy, I’m not sure he even has an out pitch any longer. He’s striking out batters, but he can’t avoid mixing in the crushable fastball that comes sooner or later. David Hess remains hittable and I’m not even sure Dan Straily or Andrew Cashner count as underachievers. I’m pessimistic about the entire Orioles rotation.

Now here’s a pitcher I’m less worried about, even though he spent the early part of the season as if he were auditioning for the Orioles starting rotation. I think we’re seeing some sloppiness, given that his exit velocities aren’t dramatically higher than last year but his barrel % has exploded. Probably a bit of predictability as well — his slider was ineffective against lefties last year, so he’s mostly abandoned it this year — and some bad luck. It wasn’t a major problem for him in the past, unlike someone like Bundy above, and he’s only allowed 15 homers the rest of his professional career other than in 2019. Until this becomes a longer pattern, I’m optimistic given his talent. I think the Brewers are doing the right thing bringing him up quickly but in the bullpen for now.

The homers aren’t helping, but neither is a .429 BABIP in 2019, which likely isn’t even sustainable in batting practice. From his hit ball data, ZiPS thinks he should have a BABIP against nearly 100 points lower, which while not exactly great, would shave a considerably chunk off his inflated ERA. Leclerc’s velocity is still there, his chlitter is still nasty, and this is a case in which I think some mechanical adjustments will probably be made while he’s exiled from his previous closer position. The basic building blocks that made Leclerc so dominant in 2018 still remain.

I like his future, but I’m not crazy about his present. I thought the Cardinals got a little too excited about his 20-strikeout spring training. I don’t think the homers are a problem long-term, but I think the immediate issue is that he remains very much more a thrower than a pitcher. 40% of his fly balls allowed becoming homers isn’t something I worry about him sustaining, but what he does need improving on is actually punching out batters. No, not every pitcher is going to whiff 11 batters a game, and Hudson’s hard sinker is counted on to result in a lot of hits driven straight into the ground, but it’s hard to say a pitcher who has had trouble striking out minor league batters isn’t someone to worry about. John Gant’s the better pitcher right now.

Talking about Aaron Nola last week, I referenced a quick tool I developed (which I refer to as zBB) to gauge whether a pitcher’s walk rate was as it was “expected” from the generalized plate discipline stats. While walk rate tends to be a predictable element for a pitcher, it’s not a perfect one after all, and you can sometimes see something hidden that “just ain’t right.” The two largest misses in zBB going back to 2007 (when the data starts existing) were Aroldis Chapman in 2011 and Jake Arrieta in 2013. zBB thought Chapman was pitching like a pitcher with a 12.3% walk rate, not the 19.8% he had with the Reds. He improved to 8.3% in 2012 and is at 11.5% for his career. Arrieta’s real walk rate in 2013 was 12.7%, zBABIP thought it should have been 6.8%. 2014, of course, was Arrieta’s big breakout year for the Cubs, feature a 6.7% walk rate.

So does this hold true for Cody Allen? Unfortunately, no, which is why the back injury is a major concern.

Whether Allen recovers or not may come down to the injury. We will keep our thumb in the middle while we wait and see how his health fares, but even if he’s healthy, the zBB numbers will tend to be smoother than reality and they show a continual trend towards worse control from Allen from his 2014. That’s enough to make it less likely he ever is truly a tippy-top-tier relief pitcher again. 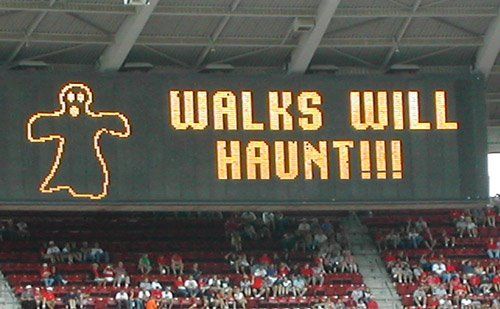 I didn’t bring up zBB just to bait-and-switch you on Cody Allen; there’s actually some good news in this measure. Kluber’s ERA has ballooned to 5.80, but a lot of that is a .380 BABIP, which I don’t think is sustainable and ZiPS doesn’t think is sustainable (ZiPS think he’s pitched like a .316 BABIP pitcher this year). The walk rate is a concern, as that’s the cause of the FIP jumping to 3.96, high by Kluber’s standards. But unlike with Allen, zBB sees some chance here, believing that Kluber should “only” have a 6.1% walk rate in 2019. That’s not quite the 4% mark he’s hovered at in recent years, but a damn sight better than 9%, representing more than half of the jump in walk rate.

There is, of course, much worse news concerning Kluber.

He’s likely out for a significant amount of time with fracture in his arm that has been reported as non-displaced, meaning that it’s a less complicated healing process. In layman’s terms, if you think of Kluber’s broken arm as a jigsaw puzzle, the pieces still match. I’m not a magical doctor with the ability to heal pitchers with glowing hands and sarcasm — if I were, as much as I love you guys, I’d be out fixing pitchers and chilling in my solid gold backyard pool — but I can at least tell you that a healthy Kluber wasn’t, in fact, broken. So long as Kluber’s arm heals well, I think he’ll return to be his usual self. Even Jason Kendall recovered from a much more gruesome injury, which I will absolutely not share; if that particularly gruesome video isn’t seared into your memory, be very wary of searching for it!

We love you too, Dan.