The Peculiarity of Pitching to Jose Altuve

Jose Altuve is short. Relative to the standard major-league baseball player, Jose Altuve is a little man. You’ve heard about this. Very recently, you’ve heard about this! Jose Altuve is short. Aaron Judge is gigantic. The two just went head-to-head in the ALCS, and they’ll do it again a few weeks from now, when MVP voting results are released. Altuve was already an anomaly, by just getting to the majors in the first place. Then he became one of the most valuable players in the sport. Trod ground, yet fertile. It remains a challenging thing to fully appreciate.

Let’s talk about that shortness. What does it mean? Now that Altuve’s in the majors. Forget about scouting biases, or how hard it was for Altuve to get noticed. That’s all behind him. He’s clearly more than proven himself. He’s amazing! How, though, is his game different from the usual one? Every so often there might be a ground ball or liner that’s just out of Altuve’s reach. So it goes. But there’s also an effect on his hitting. Two effects, I suppose, one of which is obvious, and the other one less so.

Altuve does have a small strike zone. He couldn’t not, given that strike zones are almost directly correlated to height. Altuve’s zone is relatively little, but then, it’s not that little. It’s not microscopic. Altuve has a somewhat upright stance. If the pitch-tracker strike zones are to be believed, Altuve’s zone is about 14% smaller than George Springer‘s, but it’s barely any smaller than, say, Brian McCann’s. And if you don’t trust those zones, which are human-set? Here are two screenshots, showing Altuve and Alex Bregman. I’ve drawn lines, around the hollow beneath the knee, and around the top of the belt. These are approximate limits of the effective strike zone, and you can see that Altuve’s zone doesn’t appear that much smaller. The gap between the upper two lines is only slightly bigger than the gap between the lower ones. It’s possible to throw strikes to Altuve. You don’t need to be prime Greg Maddux to do it.

So let’s shift to a more subtle effect. I’m going back to Baseball Savant again, and I’m making more use of the detailed zones. Altuve saw more high strikes. He saw fewer low strikes. This has been the trend his entire career. He played his first full major-league season in 2012. Here are his called-strike rates by pitch height, expressed as percentile rankings. The higher the percentile rank, the greater the rate of called strikes Altuve had called against him. Altuve has a somewhat small zone, owing to his height. But the other effect is that his zone is shifted upward, from where it would be for a normal player. For your average regular, the zone might stretch from the knee to the belt, or something. For Altuve, it begins above the knee, and it goes to, I don’t know, the belly button, or the lowest rib. Altuve’s strike zone, in other words, looks a lot like the familiar strike zone, except that, while the familiar strike zone stays around the same place, there’s a shorter hitter beside it. Umpires just haven’t proven themselves that good about adjusting the zone to Altuve’s specific dimensions.

Which is reasonable, given how the human brain works. We say that the zone is supposed to change for every hitter, but almost every hitter is of a similar build. Altuve’s exceptional, and how much should we really expect? Mentally changing the zone limits can’t be easy. Umpires anchor themselves to a standard box, and it just isn’t that flexible. It probably can’t be that flexible. It’s something Altuve and the pitchers have to deal with.

Altuve’s not alone. Altuve has to deal with a zone shifted up. Judge has to deal with a zone shifted down. The latter would be true for many tall players. The former would be true for many short players. But there haven’t been many players as short as Altuve. Now, there’s kind of a twist here. Altuve has to deal with this, yes, but this is also something Altuve’s been dealing with forever. Certainly for as long as he’s been in the majors, and presumably for as long as he was in the minors, and shorter than almost everyone else. This is the game that Altuve has learned to play. He’s learned how to attack high strikes, and he’s learned that he gets some lower flexibility. Altuve and Bregman have gotten accustomed to slightly different approaches.

It might be more trouble, then, for pitchers, because pitchers wouldn’t be so familiar with this. Pitchers look in and they see Altuve’s knees and Altuve’s belt. They don’t see the actual strike-zone boundaries, which are higher than they’d think. Pitchers are still conditioned to want to work down. Not very many of them have that much experience trying to pepper the upper edge. You definitely don’t want too much of your secondary stuff staying around belt-level. Because there are fewer called strikes to be found down low, in theory there are more to be found up high, but pitchers are still resistant to go there. They want so many pitches to be at the knees. Altuve makes that especially difficult, and not just because he’s so good at getting the bat to the ball.

I’ll say this for the World Series: most pitchers still don’t like to work up, but Dodgers pitchers are different. Dodgers pitchers love throwing high fastballs, and so they could find strikes against Altuve, somewhere in front of his stomach. This isn’t an ordinary matchup. But, nevertheless, Jose Altuve also isn’t an ordinary hitter. In more than one way, he goes to work with a different strike zone. He’s perfectly used to it, because it’s the only strike zone he’s ever had. For pitchers, it’s far more of a change.

Does Prep Work Change for the World Series?
The Dodgers’ Minor Roster Shake-Up

Great article. It’s cool how Altuve’s relatively normal strike-zone height has made him develop to hit balls at a normal baseball players height. 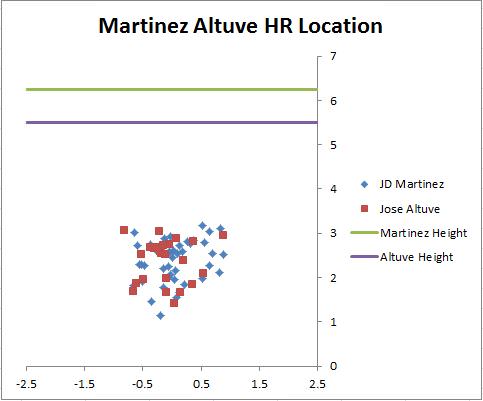