Oh, the things you find when perusing the leaderboards. While collecting data to discuss the decline in Jeremy Peña’s plate discipline, I went down a rabbit hole of player performances since May. As tends to happen, one thing led to another, and I ended up running my Cy Young predictor using only data since the start of May. Near the top of each league were pitchers whose presence surprised me even though I already knew both to be excellent. Each of them is on a borderline contender that is now very likely to make the playoffs, and each survives in the majors by relying on command rather than throwing 100-mph smoke. That’s right, I’m talking about Aaron Nola and Shane Bieber. Let’s examine each, starting with Nola, the top National League pitcher in my Cy Young predictor since May.

The Phillies look nearly certain to play postseason baseball. With a probability that is now over 90% by both FanGraphs’ and ZiPS’ reckoning, the Phils are on target to make the playoffs for the first time since 2011. While there have been runs that teased contention in past years, the Phillies have always seemed to end up floating somewhere around .500. But despite Zack Wheeler and Bryce Harper missing parts of the season, Nick Castellanos disappointing, and a defense that just begs for a Yackety Sax soundtrack, the team stands at 79-61. And while he’s obviously not the only player to have contributed to the club’s record, Nola’s impressive run makes him one of the key figures of the 2022 campaign.

Since a fairly meh start to the season, Nola has been one of the most valuable pitchers in baseball. His 5.1 WAR since May 1 is almost an entire win above the next-best pitchers, Justin Verlander and Sandy Alcantara, who are at 4.3 WAR. Nola’s never had overpowering stuff; you’ll see 92 mph fastballs from him, not 92 mph sliders. The key to his survival has always been excellent control, which has reached almost sniper-like levels this season. These are the heat maps of a pitcher with supreme confidence in his control: All of Nola’s pitches rank very highly in the league in terms of the consistency of their location. For example, here are the most consistent knuckle-curves (Nola’s bread-and-butter out pitch) and changeups in 2022 by average Euclidean distance (min. 150 pitches):

Nola has weaponized his control via a willingness to throw any pitch in any situation to any batter. I can’t remember the last time I saw a Brooks Baseball pitch usage chart that revealed “flatter” pitch choices: Naturally, this run has had a positive effect on Nola’s long-term projections. While he could technically become a free agent this winter, the Phillies would be certifiable not to pick up his $16 million team option for 2023. If they want to talk extension, it’s going to cost a pretty penny:

Now I did say that there were two pitchers with nearly identical levels of under-the-radar dominance this summer, and I don’t want to be labeled a dirty, dirty liar or have my pants catch on fire. Over in the American League, the Cleveland Guardians’ ace has experienced a similar surge.

Back in May, my colleague Luke Hooper wrote about Shane Bieber’s early season repertoire problems. Luke noted issues with Bieber’s velocity and the inconsistency of his slider, with the latter concerning him the most: 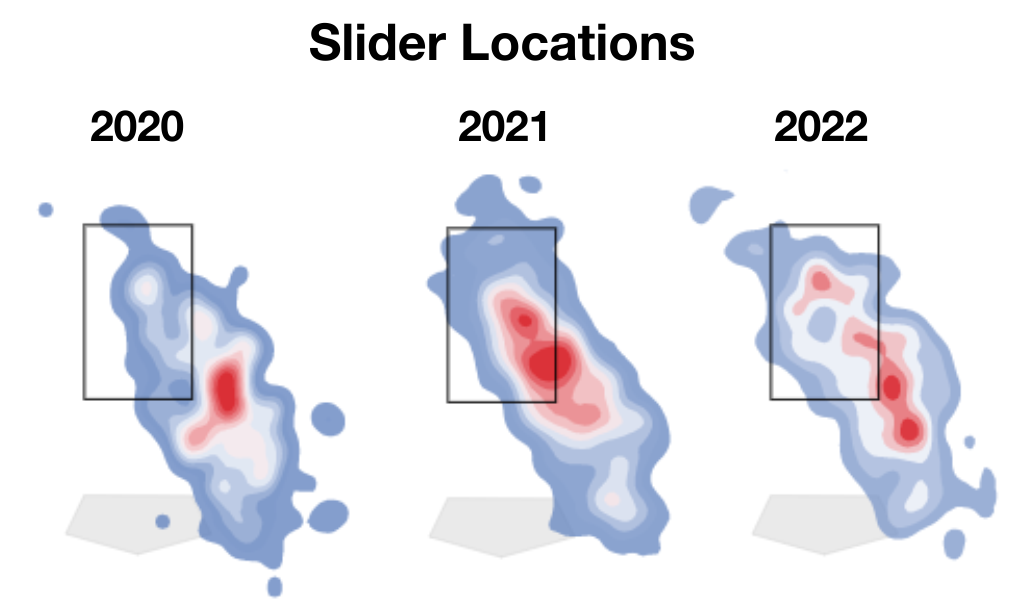 Luke finished his piece with some optimism about Bieber because in what was then the right-hander’s most recent start, a 10-strikeout outing against the Detroit Tigers, he had success sticking his slider to the outside corner without the inconsistency he had shown in the opening months of the season.

Bieber didn’t get his fastball back — while his velocity has ticked up, he’s still only been around 92 mph in recent months — and his slider’s movement remains unimpressive compared to the best pitches in the league. But the consistency of the pitch has improved steadily this season: Since Luke wrote about Bieber, he’s led the AL in WAR among pitchers:

AL Pitchers Since May 27th

Bieber is a big reason why the Guardians are hanging on to a three-game lead in the AL Central and have been threatening to pull away from the White Sox and Twins.

Like Nola, Bieber has added quite a bit to his long-term projection this season. Whereas back in March, ZiPS projected a five-year extension starting in 2025 at $108 million, the system has added about $40 million to a future deal since:

The question, of course, is whether the Guardians will be willing to pay the asking price to keep Bieber around beyond 2024. The chances of that don’t seem great, given the team’s history of trading starting pitchers in splashy deals right before they hit free agency rather than extending them.

Now, Cy Young awards encompass the entire season and, well, April counts. Over the entire season, both Nola and Bieber still rank in the top five in their respective leagues in my predictor. In the end, I don’t expect either to actually win the award. Sandy Alcantara and Carlos Rodón have been just as good as Nola, but they’ve gotten much more attention for their performances. Dylan Cease and Shohei Ohtani are far more explosive than Bieber, and while win-loss record doesn’t mean anywhere near as much to voters as it used to, Justin Verlander could finish at 18-3 or 19-3 on top of his excellent numbers and workhorse reputation. But we don’t need fall hardware to take some time to be impressed by two pitchers who are dominating their respective leagues without actually appearing dominant.

sure. would you like fries with that as well?

You mean the preseason three-years? Those are pretty much frozen in time.