The Art, Science, and Psychology of Catcher Framing

Catching is a thankless job, but it’s widely considered to be one of the most important roles on the field. In 2018, there were 721,191 pitches thrown in the major leagues, and there was a catcher on the receiving end of all of them. Of those pitches, umpires got the ball or strike call wrong nearly 5% of the time. Every umpire has quantifiable tendencies, some of which adjust from pitcher to pitcher and some of which remain consistent. Nearly all umpiring careers follow a trajectory similar to that of players, in that they start in the minor leagues and work to be promoted, calling balls and strikes in front of TrackMan arrays, often for years.

As such, the sample of data teams can use to detect those tendencies grows quickly. The more pitches called, the more data teams collect, meaning that by the time umpires reach the upper levels of the minor leagues, their tendencies are a known commodity. And while umpires can and certainly do improve their craft, old habits are tough to kick. In March, building on previous research, FanGraphs released an update to our catcher WAR that includes the value of pitch framing. Which catchers generate more called strikes for their pitchers can be quantified, but the question remains: How can catchers improve their receiving abilities?

To start, it’s probably better to think of it not as pitch “framing,” but as pitch “absorption.” Consider the following. A baseball is about five ounces. That might not seem like much, but try to envision yourself catching an object that is moving in different directions and hitting different locations with the speed of a major league pitch and not only being able to keep still, but guide the ball in a motion that we call “framing” in order to make the pitch seem closer than it is. Of those 721,191 major league pitches thrown in 2018, 604,007 were “competitive” — more than 124 pitches per game, per team, that had a chance to be called a strike.

In order to enhance the possibility that these competitive pitches are called strikes, catchers can train to optimize what I like to call their angles of strength. Angles of strength can be described as the most optimal angle at which to position your target (i.e. your body and your glove) to be able to control the ball as much as possible. When hitting and throwing a baseball, efficient movement patterns are crucial in optimizing strength. The same kinetic principles apply to a catcher absorbing a pitch.

A “standard” catcher squat, if you will, enables a catcher to equally distribute energy to either leg and maintain his weight in the center of his body. If done correctly, this is the strongest position at which a catcher can conceivably start his body in order to maximize his strength. From that squat position, subtle movements are tremendously valuable in mirroring pitch movement and pitch location in order to absorb pitches.

Say a right-handed pitcher is on the mound and his arsenal predominantly features a mix of two-seam fastballs and sliders. From the catcher’s point of view, the two-seamer will move from right to left, and the slider will move from left to right. In order to prepare to receive a pitch optimally, a catcher will turn his body a few degrees in the direction from which the pitch is coming. For the aforementioned right-handed two-seamer, a catcher will slightly pivot his right toes to face first base and move his heel slightly back, opening up his torso to face the area between where a traditional second baseman stands and the second base bag. This is the tunnel from which the pitch will arrive, so mirroring that pitch entry with his body is the goal. For a right-handed slider, which moves in the opposite direction, the same movement is done with the opposite leg.

The subtle movements that are important when angling the body are equally important when angling the glove to receive the ball. Given that the goal is to make the ball seem like it is at the center of the torso, a catcher aligning his whole body to prepare for that movement is important. If a pitch is coming and the catcher determines it to be low, he would move his glove to the spot and leave his elbow higher than the glove. From the pitcher’s point of view, if the glove is facing 7:00 on a clock, the elbow should be at about 2:00. When the ball is received, the glove begins moving up from 7:00 to 7:30, then 8:00, and eventually 9:00. The elbow will naturally shift closer to 3:00, to create an arm angle that is close to completely parallel to the ground.

Pivoting the arm in this manner creates a perception of fluidity and eliminates movement that is in more than one direction. If the elbow were to have also gone down with the glove and the catcher attempted to maintain a parallel angle throughout his entire pitch absorption, it would require the entire arm to move up toward the torso after receiving, which is both a less natural-looking movement and also more movement in general. The more subtle and natural the movement, the better.

Pitch framing is not all about anticipating pitch location or moving it after it is caught, however. It also has to do with giving the umpire the ability to see the pitch as well as possible. Umpires are taught to set up in the “slot” between the catcher’s head and the batter on the inner part of the plate. This is done for visibility and also to help protect them from foul balls, as more foul balls are hit over the outside shoulder of the catcher than vice versa.

Of course, the umpire angling themselves in such a manner also could cause inconsistencies in depth perception from one side of the plate to the other. In order to assist an umpire in seeing the entire plate and not blocking their view of the outer portion of it, catchers train to drop their leg down and out and receive the ball lower to the ground. If a right-handed hitter is up, the catcher drops his left leg. If a left-handed hitter is up, he drops his right leg. For some pitches that are low, this also helps a catcher’s absorption of the pitch — his torso is closer to the point at which the ball crosses the plate, and therefore the movement of the ball toward the center covers less distance.

Here is a catcher setting up in a “traditional” stance for a pitch away from a right-handed hitter, from the umpire’s point of view. 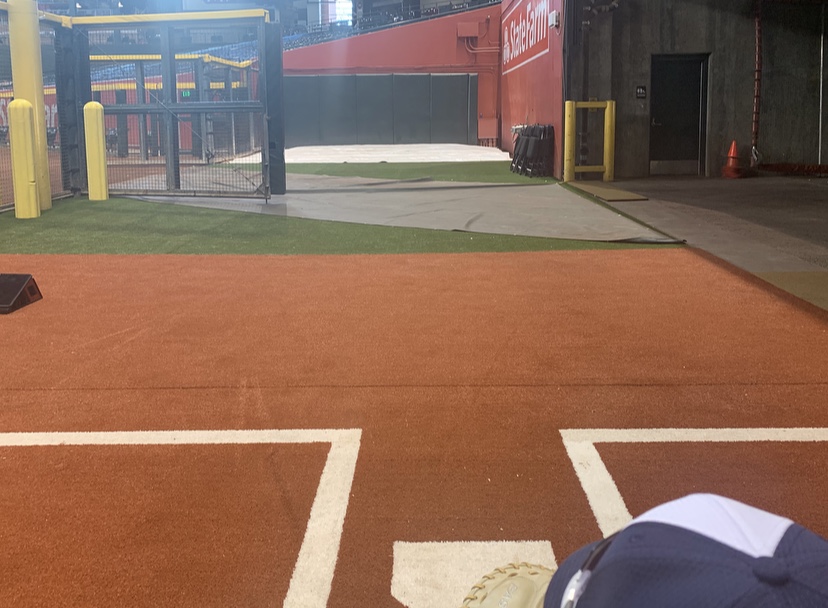 And this is a catcher setting up for a pitch away from a right-handed hitter with his left leg down, from the umpire’s point of view. 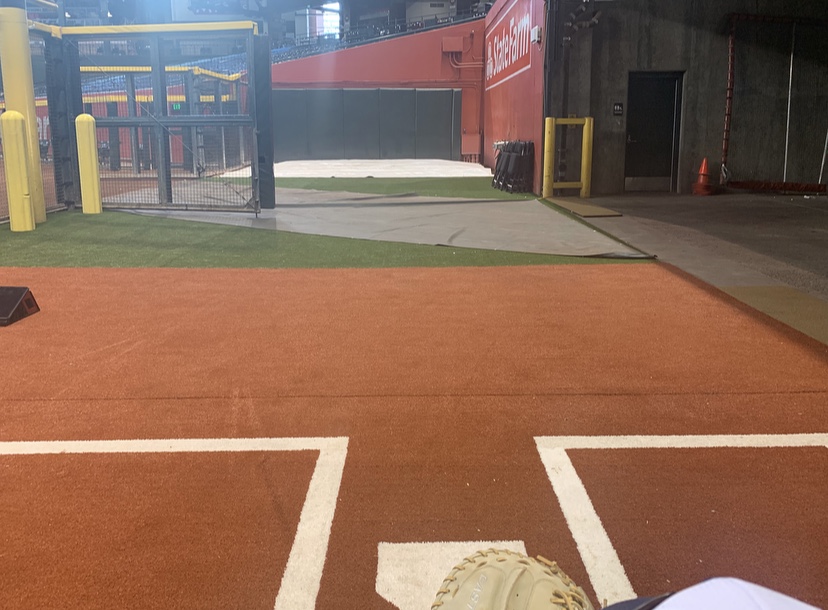 The final piece of the puzzle of teaching catcher framing is player engagement. Preaching the message is a lot different than getting the player excited about practicing it. People love winning. Baseball players are people. Professional baseball players are, almost to a fault, hyper-competitive people. Hyper-competitive people love winning more than the rest of us. For this reason, when dealing with professional baseball players, it is important to attempt to make a competition out of as many baseball-related things as possible. We’ve all heard stories about card games on the bus and ping pong games in the clubhouse and, now that it’s 2019 and I’m probably obliged to say this, late night games of Fortnite. Making a competition out of pitch presentation is a way to help catchers not only get excited about practicing the craft, but to also help them learn the tools by which they are evaluated.

For example, let’s say we have a pitch that is called a ball 60% of the time. We know this because of the umpiring data we’ve collected over the years. If a catcher receives that pitch and it’s called a strike, he gets 10 points. If the next pitch is called a strike 60% of the time and the catcher receives that pitch and it’s called a ball, he loses 10 points. The totals are then added up at the end of the game. Organizations can tweak and normalize as they wish depending on any umpiring outliers or game-dependent variables that might come up (things like amount of pitches, weather, pitcher’s arsenal, age, etc.).

This allows players from every level — from rookie ball at the complexes all the way up to the big leagues — to compare and contrast their receiving metrics against one another in a fun and competitive way, while also familiarizing them with the evaluative data in a very natural fashion. Those Fortnite games might be treated as tiebreakers, but the players are also well aware of how strikes are correlated to outs and outs are correlated to wins. Winning is an incentive for everyone, and catchers absorbing pitches has proven to be a very valuable way to increase a team’s chances of winning.

Editor’s note: An earlier version of this piece included a calculation of the force of the ball as it hit the catcher’s mitt. That calculation, as astutely noted by our readers, was a bit too simplistic, and has been removed to eliminate confusion as it wasn’t essential to the discussion of catching technique. Our apologies.

Josh Herzenberg has served as an area scout and a minor league coach for the Dodgers. He can be found on Twitter @JoshHerzenberg.

Member
mclaughlin6464
You can flag a comment by clicking its flag icon. Website admin will know that you reported it. Admins may or may not choose to remove the comment or block the author. And please don't worry, your report will be anonymous.

Your force calculation is wrong. A baseball travels at ~ 42 m/s, not m/s^2. You’ve mixed velocity and acceleration.

Member
AC_Butcha_AC
You can flag a comment by clicking its flag icon. Website admin will know that you reported it. Admins may or may not choose to remove the comment or block the author. And please don't worry, your report will be anonymous.

This. Sorry to be that guy but F=m*a where a=Acceleration e.g “change in velocity over change in time”. The quicker the ball is negatively accelerated (deccelerated), the more Force the catcher has to exert. So “soft hands” as in catching an egg decreases the Force. Hence less probability that the egg breaks.
To calculate a good estimate of the Force at impact you would have to get ball velocity at home plate and an estimation of how quick the ball chnages velocity to zero.